The Wacky World of Comic-Con

It’s all about being clever with what you produce. Movie set on an aeroplane? How about some boarding passes and passports emblazoned with the name of the film? Pirate adventure flick? What could be a better than an engraved doubloon and branded eye patch combo?

It’s that time of year when geeks, nerds and movie buffs worldwide rejoice—San Diego Comic-Con has arrived! Starting off as a relatively small event back in 1970 it’s now grown into one of the biggest multigenre conventions in the world.

San Diego Comic-Con has also spawned imitators globally, including both the London Film and Comic Con and MCM Manchester Comic Con, both happening later this month.

Originally created as a way to showcase new comics, as well as a select few sci-fi and fantasy movies, the event is now host to thousands of pop culture properties—everything from independent horror flicks to My Little Pony!

What’s more, with so many shows going on up and down the UK and the US, it provides so many opportunities to get your film out there in the public eye.

This year alone we’ve got the big guys like Marvel and Star Wars joining forces with Lego to create some awesome life-sized scenes. The Lego Hulk vs Hulkbuster from Avengers: Age of Ultron is particularly awesome, but not a patch on the 6 foot Lego Stormtrooper if you ask me! Made of 33,200 bricks, the statue is modelled after the updated First Order Stormtroopers we’re going to be seeing at the end of this year. Anyone who knows me can guess just how excited this makes me!

Mister.S lives and breathes Comic-Con, and in the past we’ve managed to create some really unique merchandising opportunities that people simply can’t get anywhere else. It’s also a really cost effective way to create interest across the Internet and beyond, as put the right thing on display and convention attendees will shout about your new movie or TV show for you!

The potential is as big or small as you’d like it to be. Badges, keyrings and t-shirts are really popular across the board, both with smaller films and huge franchises like Teenage Mutant Ninja Turtles and Doctor Who.

But just as we pride ourselves on creative key art and production design, we’ve got a knack for really interesting marketing campaigns as well. We love a good limited edition goodie bag full of fun stuff like branded postcards, event passes, air fresheners, even phone cases!

It’s all about being clever with what you produce. Movie set on an aeroplane? How about some boarding passes and passports emblazoned with the name of the film? Pirate adventure flick? What could be a better than an engraved doubloon and branded eye patch combo?

What we’ve found over the last few years is that canvas bags are the hot ticket. Back in 2007, canvas bags started popping up all over the convention floor, and by 2008 Warner Bros. had bagged the rights to the official bag of the show!

It’s all well and good selling or giving away merch, but there’s something pretty nifty about making the bag that everyone can fill with their treasure and have hanging off their shoulders, advertising your new movie!

I’m looking forward to the surprises that will come out of this weekend’s San Diego event, as well as the other conventions going on around the world. They’re always worth checking out for industry news, and to see which unexpected films capture the crowd’s imagination in a big way. The way I see it, with so many genre fans concentrated in one place, it just makes sense to get in on the ground floor. 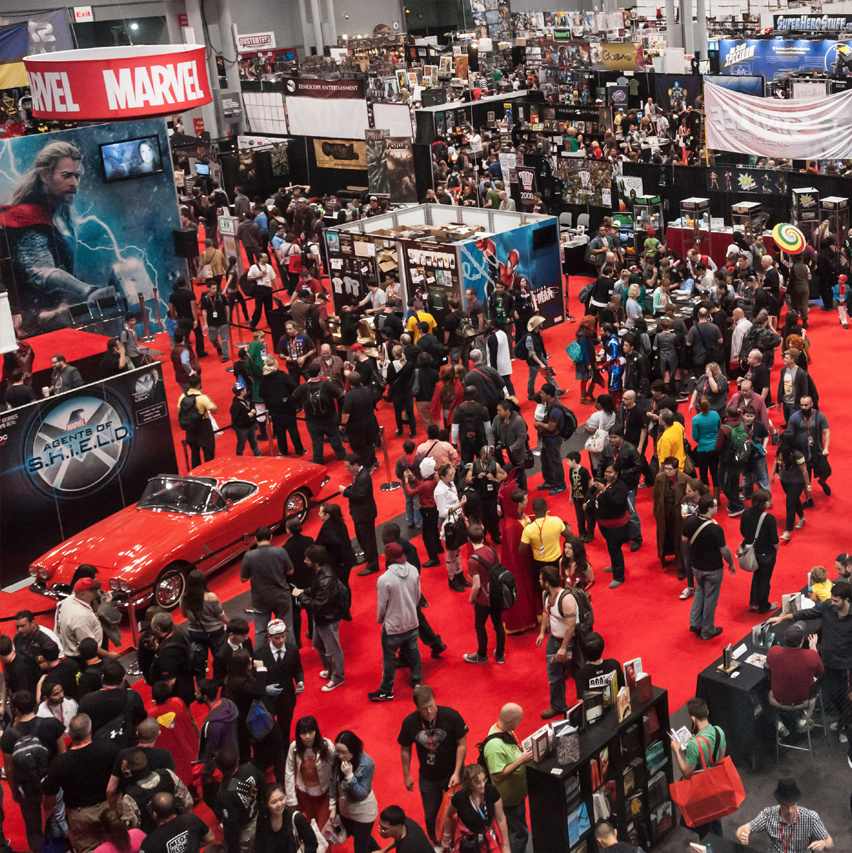